You are here: Home » News » Industry News » The Advantages and Application of Energy - Saving Tunnel Oven

The Advantages and Application of Energy - Saving Tunnel Oven

Tunnel oven is widely used in bakeries and factories. It is an important part of cake production line, biscuit production line like spiral cooling tower. 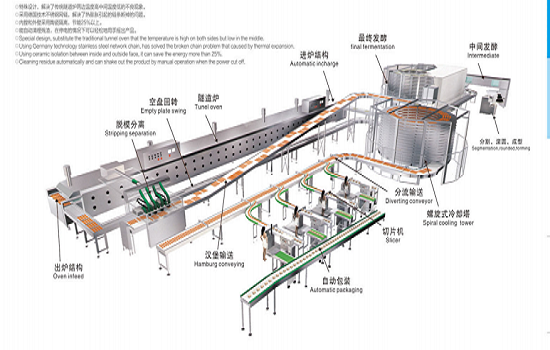 Current tunnel oven energy consumption has already reached a certain level, from a purely had appeared in the heating mode to improve the bottleneck, in other words on the domestic market at present the tunnel oven energy consumption on the same kind of heating mode is not tactically, basically stood on the same starting line, so the competition is already beyond the technical level, mainly on the cost of mesh belt tunnel oven.

The generation of energy-saving tunnel oven equipment is in fact to comply with the national policy of energy conservation and emission reduction, but in the long run, it also saves a lot of expenses for enterprises.

To sum up: changing the heating method is only a palliative method, the change of furnace structure can really solve the problem of high energy consumption tunnel furnace. After many tests and improvements, we successfully developed a new type of tunnel oven structure, which solves the existing defects of the tunnel oven, and its energy saving effect is as low as 30%. This technology has been applied for the national invention patent, in order to ensure the confidentiality of the technology, we also applied for the patent of utility model, and asked the national patent department to postpone the announcement.

Economic benefit analysis: master the advanced furnace structure technology is equivalent to improve the competitiveness of the company itself; As a user, will certainly accept the lower energy consumption of tunnel oven; In terms of current domestic market demand, the benefits brought by this technology are undoubtedly huge.